RTA: Intercity Bus Service between Detroit and Ann Arbor, Coming To A Southeast Michigan Near You

Often discussed in conversations about regional transit expansion in Southeast Michigan is the idea of a high-speed rail connection between Ann Arbor and Detroit. At face value, it seems like a slam dunk: Ann Arbor has over 120,000 residents and Detroit roughly 650,000, and there’s a large amount of movement between the two. Both cities have major employers– including ones that draw from a huge commuter base.

But, as a nonprofit transit advocate pointed out to me recently, costs for rail are staggeringly high. The cost of a rail connection between the two cities could eat up much of the yet-hypothetical RTA millage revenues. That is, unless these funds were further leveraged by, say, grants from a federal administration that has been pretty hostile to transit. So, meanwhile, the RTA yesterday held two hearings about a pilot program for fast, frequent, commuter bus service between the two cities. RTA hopes that this can demonstrate strong commuter demand in building the case for transit expansion.

“BUSES! BUT WE WANTED A TRAIN!”

Indeed. A bit of background may be useful. The “rail vs. bus” debate is a lively one in urbanist circles. Advocates of bus rapid transit, or BRT, argue that BRT is cheaper to build and operate than rail. Advocates of light rail transit, or LRT, say that, well, trains are just better! In the cases of poorly executed streetcars, this comes out as an obvious and egregious fallacy. Look at the Loop Trolley in St. Louis, a heritage streetcar that duplicates transit routes and is shutting down after about, you know, 45 minutes of operation. He built it, and they didn’t come.

The QLINE isn’t much different. B0th the QLINE and the Loop Trolley in St. Louis were, in no small part, pet projects of rich people who refused to heed professional planning advice– are we noticing a trend here?

In contrast, the most-ridden light rail systems in the United States, beyond the ancient and honorable ones (like San Francisco), include newer systems like Seattle’s Red Line / Central Link (3rd highest ridership, opened 2009), Minneapolis-St. Paul (4th, opened 2004) and Kansas City (8th, opened 2016, and has made headlines recently because it’s free, and free transit is gaining traction as a vehicle for infrastructure investment and congestion mitigation).

IT CAN HAPPEN HERE– RIGHT?

Personally, I love trains. I grew up around trains– Amtrak, SEPTA, and NJ Transit, and, later, the Acela. Another point for trains for me: I am heavily susceptible to motion sickness, which, for whatever reason, affects me sometimes on buses and almost always while riding in cars, but not while riding on trains or planes or while driving, weirdly enough. I recall the unique East Warren bus’ scent of latent pot smoke and uncombusted diesel exhaust perfuming the cabin of the bus on a subzero day in February.

Advocates of rail development often argue that rail might cost as little as $1-2 million per mile. Compare that with the cost of New York City’s notorious Second Avenue line, which is coming in at around $2.5 billion per mile. CityLab looked at costs across a number of cities and found prices not lower than $170 million per mile to build even freeway median rail. This sounds high until you realize that widening a freeway costs a comparable amount. Advocates of highways similarly claim speciously low numbers that are at odds with the realistic costs of highway construction or expansion.

What drives the costs? According to the New York Times, which conducted an exhaustive investigation into the MTA case, quite a bit. For highways, land acquisition costs are outrageously high. Utility monopolies have a history of not playing nicely with others when it comes to reworking infrastructure. Class I railroads don’t play nicely with anyone.

From a more functional perspective, though, and one more local to home, cash-strapped governments can’t invest in things unless they have an ironclad guarantee of a revenue stream. We do not build monumental things anymore in the United States, because governments don’t have money or credit capacity. Thanks, austerity.

Traffic got you down? Just Build More Lanes! This image represents the traffic that could be carried by a couple of buses. (Robert Zsombori)

BUS TIME, IN THE MEAN TIME

So, while we may one day enjoy rail service between Detroit and Ann Arbor, we now have a proposed bus. And as proposed, it would have buses every half hour leaving Ann Arbor (Blake Transit Center) and Detroit (Grand Circus Park was proposed, though many attendees suggested CAYMC or Rosa Parks Transit Center as an alternative) from around 6am to 11pm on weekdays and 9:45am until 11pm on weekends. The objective is a nonstop trip leaving every 15m that can compete with cars for speed and can be dynamically routed based on traffic. RTA plans to offer $2 discount per ticket for advance reservations but said fares could be bought on board as well, and will offer discounts for multiple trip tickets. Buses would feature all modern amenities like wi-fi, usb charging ports, and would be wheelchair accessible.

Nithin Vejendla, with whom I participate in the Detroiters for Parking Reform group, mentioned that this service would overlap with existing services. Success, then, seems wholly dependent upon being able to corner this market by providing better, more affordable service than competitors. Honestly, it’d probably be most effective to get rid of the U of M connector at that point. Duplicating service is never a good way to bolster access, though the big point that this service seems to miss is the airport connection. (The University of Michigan has not responded to a request for comment and declined to participate in the transit and mobility survey that I completed previously).

Attendees of the public hearing yesterday raised questions about the cost and the costing methodology. RTA dubiously included Uber fare in their calculation– but did not include the cost of driving that distance. The roughly 84-mile round trip is about $9.61 at 24.9mpg average and $2.85 per gallon of gasoline. Greyhound, RTA says, costs $12, the U of M Connector bus costs $6, and Amtrak $21.

So, I’m not really sure that $10 (after the advance purchase) is outrageous, given that car ownership costs an estimated average of $27 per day. But, as the transiterati pointed out on Twitter, high fares are not a good way to get high ridership numbers. It’s a strange catch-22, and one we have to at some point confront head-on if we’re serious about addressing congestion and affordability of transportation.

So. Can the RTA’s plan work? 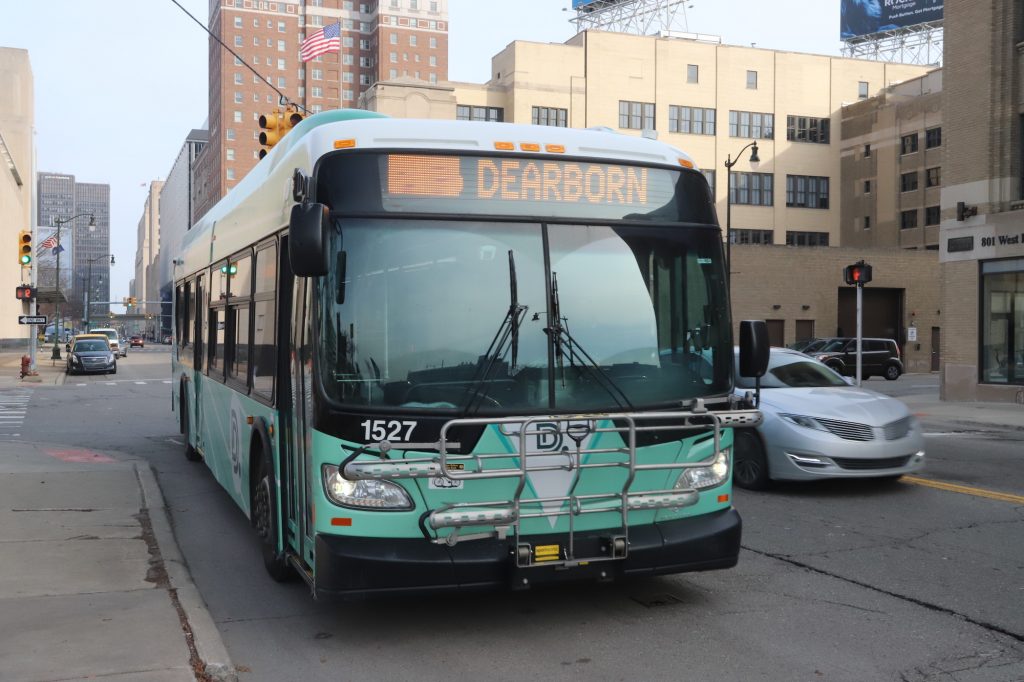 The DDOT Vernor bus picks up in downtown Detroit (December 2019).

Let’s look at some traffic figures. I’ll get more into these in other articles, but there’s a great map from MDOT that shows traffic counts from all over the state. I took two of the most heavily trafficked points, according to this map, between Detroit and Ann Arbor on the east-west routes that carry most of the commuter traffic. For the uninitiated, Detroit and Ann Arbor are connected via I-94 on the south, which goes by the airport, the hulking, former Adoba Ecotel, the giant Uniroyal tire, and more, and by I-96 and M-14 on the north, which passes through Michigan’s second-finest strip mall suburb (after Warren) before connecting to the city’s West Side. M-14 is the “scenic” route, going through largely undeveloped woodland on the approach to the Arbz (and I-96 is sunken for much of the journey between I-275 and downtown Detroit), while I-94 is elevated and bordered by signs for motels and car dealerships.

Per MDOT, traffic numbers are as follows:

With the disclaimer that I’m not a traffic engineer, I’m taking an educated guess that there is little to no overlap between traffic on these two segments because they are more or less parallel and therefore duplicative routes. In other words, I don’t think I’m double-counting any travelers through these two segments. That totals 215,901 cars per day.

Suppose one could shift just 2% of these travelers to a rail or bus alternative going the whole way between Detroit and Ann Arbor. That’s 4,318 passengers per day. At $12 per day, that’s $51,816. I’m unclear on costing methodologies, so I can’t speculate about farebox recovery ratio (how much of each dollar comes back to the transit agency from the fares). But that’s a lot of bucks.

Two of the most heavily trafficked segments on M-14/I-96 (Plymouth, in the North) and I-94 (Ypsilanti, in the south) between Ann Arbor and Detroit. (Oh, you’ve also noticed that I’m not a graphic designer?)

THE TRAFFIC IS YOU!

Following my favorite adage, every percentage point of cars represents more than two thousand cars that are not on the roads. I don’t even need to get onto my soapbox about clean air and carbon footprint– that’s a huge impact.

But success will be wholly dependent upon the RTA’s ability to rally support from employers with a large number of commuters as well as institutions like the University of Michigan. And it is still unclear what the funding looks like.

After that, maybe we could revisit a high speed rail link– perhaps with a separate connection to the airport. Best guess, this would cost somewhere in the vicinity of $6-10 billion. That doesn’t exactly pencil out if you’re going for affordable fares of $10 per trip– so it becomes a question of not just replacing single trips but rather eliminating the need for car ownership. At that point, we’re not talking about $10 per trip in revenue, we’re talking about saving $10,000 per person per year for car ownership.

As the multibillion dollar boondoggles of the I-75 and I-94 “modernization” prove, there’s plenty of money to be spent– it’s just a matter of allocating it to the important things.

I think we all agreed that, ongoing discussions of fare aside, this is the right step forward for a much-needed transit connection.

(Comments and clarifications were requested from Amtrak, the RTA, and the University of Michigan for some additional details on this story, but responses had not been received as of the time of publication. This story will be updated accordingly).