Only In New York: Capital Mistakes in Density

In the past ten years, even the most idealistic planner has become inured to the rampant densification of already jam-packed areas in cities like New York. It’s been the trend du jour– nay, du décennie, even- to knock down even fully occupied, profitable, and serviceable buildings– and build slightly taller ones in their stead. I was reminded of this in a recent post by Jason Thorne on LinkedIn about JPMorgan Chase’s new building at 270 Park Avenue. Curbed New York made a map of these, which are mostly in Midtown Manhattan.

This sort of thing doesn’t really happen in other cities, of course– only in New York, people!

It may well be the undoing of their market, though I doubt most people are too worried. It’s a matter of economic efficiency or lack thereof.

Chase argued that this location was the only possible location given that other markets didn’t support the project. Whatever that even means. Stranger still to those of us in comparatively underdeveloped Midwestern markets is how zoning essentially becomes a layer cake in which the upper layers are accessible to those who want to dole out the big bucks to buy things like air rights, as came up in this project. YIMBY proponents of supertall structures is that they cram more graham per square foot, because density and floor-area-ratio are the only factor to ever consider, and cost is irrelevant, right?

Does it make financial sense? How much does supertall cost? Some napkin math here.

225 W. 57th St., the Nordstrom Tower, replaced a couple of pretty, older buildings of far lower density, but still more than a few stories tall. About $2,334 per square foot.

1 Vanderbilt: $1,891 per square foot. A bargain! This replaced a bunch of historic buildings that were in the 6-12 story range near Grand Central Station. Denser? Yes. But a net positive gain for the economy? That Amazon speculation was able to drive up prices in the comparatively far-flung Long Island City, across the East River, one might think that it might make sense to diversify from the jam-packed enclave of Midtown. (People certainly will during the next recession.)

It’s hard to imagine exactly what it’d look like to be able to spend $3,000 per square foot on construction. Meanwhile, in markets where money goes literally ten times farther, we’re stuck wondering how we can so much as get access to that kind of capital. At least as far as transnational corporations and their capital are concerned, dollars spent in New York City mean dollars that have to come from somewhere else. And if Chase Bank is spending that money, it means that’s money they’re not investing in something else.

My Wharton friends would say something to the effect of, “wElL iF tHeY hAvE tHe mOnEy tHeN wHo cArEs?” Clearly, this is an oversimplification. It’s not just a matter of having the money. It is– or at least should be- a matter of return on investment. Companies investing in New York at a price of $3,000 per square foot are far less likely to see that money come back to them. Even the highest price office real estate is renting for, what, $30, $50, or more per square foot? Do the math.

This becomes a problem when publicly traded corporations are building these supertall skyscrapers at enormous cost, much of it in land acquisition in a complex and large real estate bubble, no less, while other markets struggle with the ability to access capital for profitable ends. Budgeting your project based on a 50 or 100-year lease seems like a pretty ass-backwards profit model for a company whose obligation is to its shareholders. (While the same argument has been used against investment in sustainability praxis, there is heavier irony in how profitable plenty of sustainability products are). In Detroit, Chase, among others, have actively restricted the amount of capital being lent for things like  real estate development.

We’ve seen this all over, of course.

But in a market where sometimes land is worth literally nothing in the “free” market, it’s even more of a testament to why affordable housing developers have a greater opportunity to build better, build denser, build greener on these sites, as a way of redeveloping areas that have been decimated by population loss– but still enjoy close proximity to well-developed infrastructure, being in a city.

I will never fail to understand how YIMBY’s continue to defend this sort of extreme densification as opposed to setting their sights on far lower hanging fruits– like, say, densifying the areas of even places like New York City that remain super low density. Ain’t y’all been to Staten fricking Island? Queens? How about the suburbs that extend endlessly in perpetual, twinned states of stagnation, congestion, and low density? Come on, people. 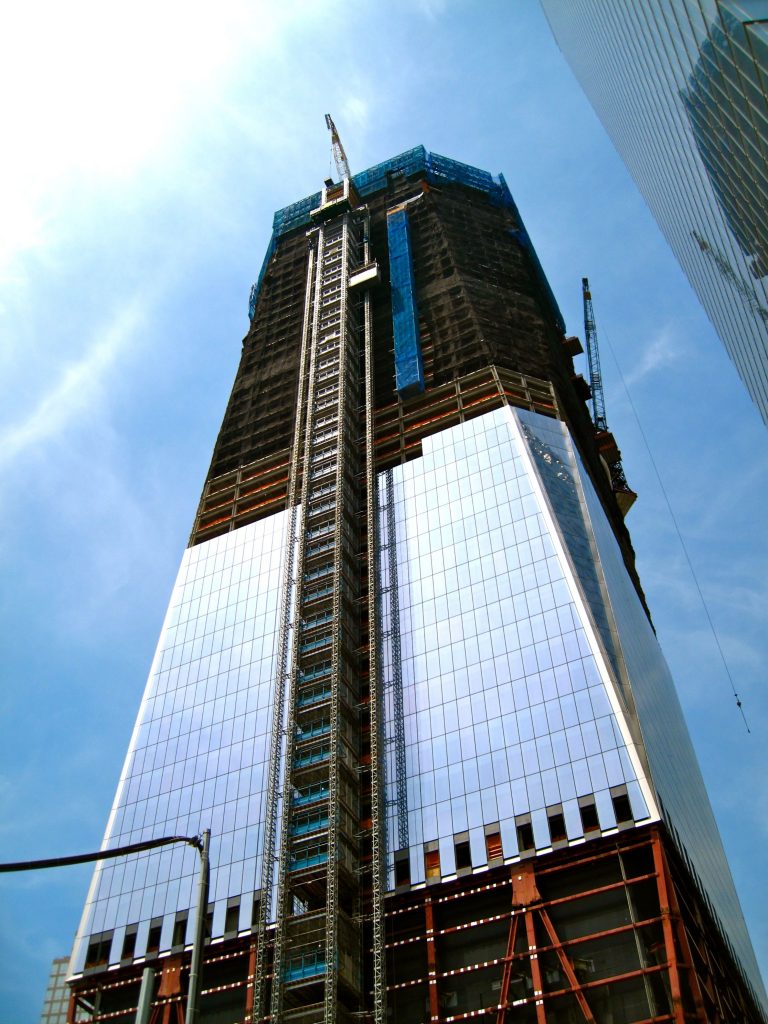 A skyscraper under construction. (CCL)