Autonomous Vehicles And The City Of To-Morrow

No, it’s not a Potemkin Village in which erstwhile Governor Rick Snyder staged his great Austerity March for propaganda films. It’s the MCity Test Facility at the University of Michigan’s North Campus in Ann Arbor. The site, designed to test the autonomous vehicles of to-morrow, was developed along with a number of other labs and research facilities when the university acquired a former Pfizer facility when it closed in 2007.

As part of an event for the Young Professionals in Transportation, I arrived on what will hopefully be the second to last sweaty-hot day of the year with a Detroit contingent including some former colleagues from the City. We all drove separately, of course, because the high-speed rail won’t be built for another 20 years. 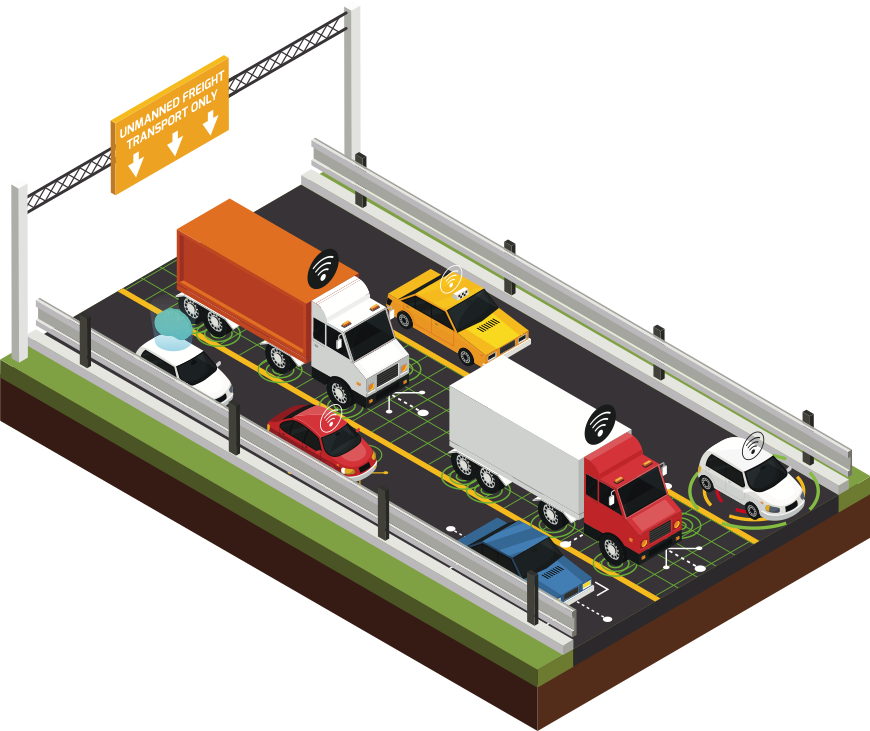 Autonomous Vehicles would benefit from, but not necessarily require for successful implementation, systemwide infrastructure improvements that combined improved, uniform road design standards with “smart” technology to manage traffic flow and tell cars a bit more information about what’s going on.

We were welcomed by Assistant Director Victoria (Vicky) Waters, who walked us down the winding drive from the MCity offices to the site itself, which is fenced off from civilization. The 32-acre site is situated on rolling hills to improve sightlines for the robots, and the chain link perimeter fence is festooned with banners of sponsor companies who help fund the research. MCity essentially leases itself out to companies interested in testing vehicle technology in real-life, however controlled environments. The site features a variety of intersection and street designs, a simulated tree canopy, and a tunnel designed to simulate a GPS-blocking environment of an underpass.

Waters walked us around the street grid, which also features some make-believe storefronts, complete with sidewalk patios. She pointed out a handful of robotic lawnmowers that were diligently milling about some sections of grass in the middle of the site before finding their way back to their respective charging cradles. It is truly a sight to behold and looks more or less like a real cityscape. 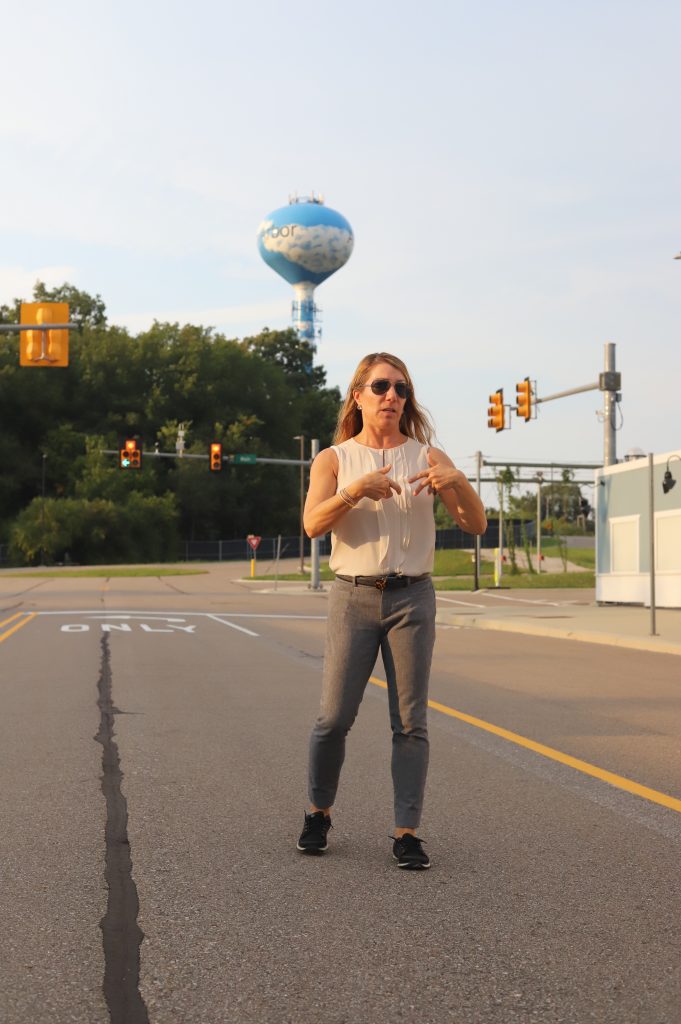 MCity Assistant Director Victoria Waters explains DSRC and the quite sophisticated setup of the test facility.

We stopped to look at a crosswalk equipped with what us lefty planners derisively call a “Beg Button” that, when pressed, begins the cycle of flashing some orange lights so we can cross safely. This was used as an example to explain Dedicated Short Range Communications technology (DSCR, not to be confused with the other DSCR that the Big Three are kind of lacking these days), which is one of the guiding lights on how AV’s interact with their surroundings.

Example: A car is driving through an urban area at 25 miles per hour (40km/h). 0.6 miles ahead (1k), a group of pedestrians enter a crosswalk. That crosswalk is able to transmit a signal to any equipped car nearby. In an autonomous vehicle, this information would enter the series of tubes in the AV software. Car brain would then decide whether, based on its current speed and spacing from other vehicles, it needed to slow down or not in anticipation of the pedestrians. (If, for example, they were Cubs fans or city building inspectors, a truly “smart” car might actually speed up.)

Realistic Practice: As a matter of pedestrian safety, I’m going to again invoke my favorite phrase and call it a bit of an intellectual tour de force in a conceptual desert. We know that pedestrian and cyclist safety is not a matter of us lacking 5G transmitters on every building and connected cars that can translate our verbal instructions to driving directions, but rather a matter of our society’s 20th century-and-beyond obsession with designing cities for cars and for cars alone. Jalopnik recently came out swinging against some neoliberal techno-optimist’s harebrained idea that we should turn sidewalks themselves into essentially restricted-access spaces to cater to autonomous vehicles. 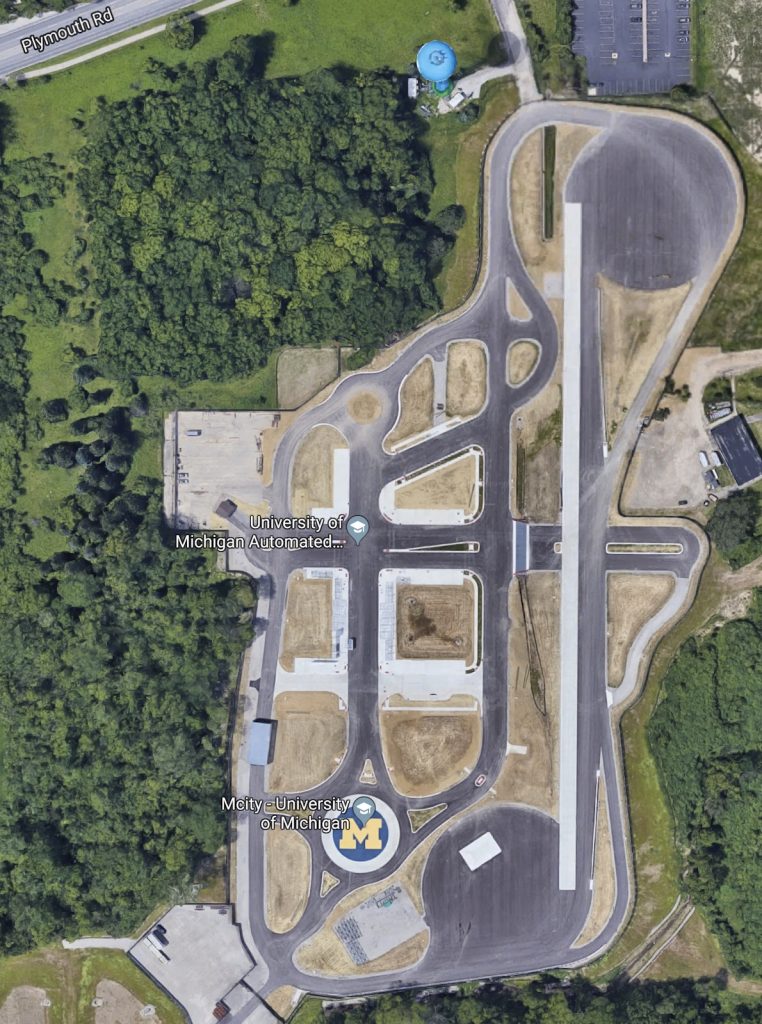 Waters is clearly passionate and invested in the work she is doing with MCity, but thinks that autonomous vehicles remain a bit too pie-in-the-sky for us to be blindly optimistic about them solving all of the world’s problems. There is no regulatory consistency, she says, and the federal government has failed to step up to the plate to facilitate the development of robust guidelines and frameworks. Collaboration has been limited in an industry historically very protective of its innovations, and this has only become more entrenched with the rise of so-called Connected Vehicles. Security remains a huge concern, as evidenced by the likes of a 2015 incident that saw a Jeep maliciously hacked remotely while driving on a highway.

And there are further stormclouds on the horizon, with an economic pullback looming. This has been evidenced in automotive just this week in Moody’s downgrading Ford Motor’s credit to junk status after an exorbitant restructuring. (Wow, it’s almost like I called this a couple of weeks ago and said that this exact same thing was going to happen!) With few plans for commercialization and an inevitable sales dip accompanying whatever trainwreck of a credit crunch is about to happen in the economy, the Big Two and a Half can invariably plan on selling fewer cars, which will hurt the bottom line.

But just because the future of for-profit, autonomous vehicle technology has an uncertain future, though, doesn’t mean that cities do– nor does it mean we should give up on all of the technology. Intelligent Transportation Systems comprise a field of technology that is already nearly a half century old, and, as Detroit city engineer Tony Geara noted at the event yesterday, technology is always evolving, changing, and getting better, so we must constantly consider this in the process of periodic infrastructure repair, renovation, and maintenance. This should be on everyone’s mind as we face an unmitigated catastrophe of infrastructure deterioration. While we should remain cautious about putting all of our eggs in an autonomously-driven basket, we should always remain focused on figuring out ways to make cities work better for people. If technology can help that, I’m certainly listening and interested. 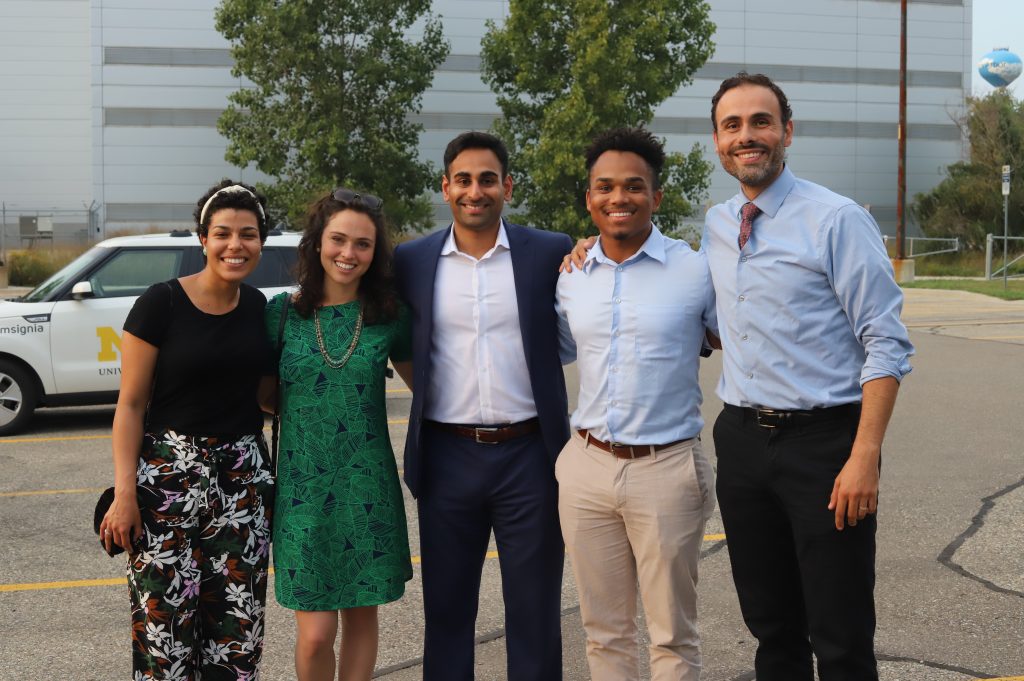 The City of Detroit contingent at MCity’s facilities outside Ann Arbor. From left: Hind Ourahou, Mobility Strategist; Amarynth Sichel, Impact Investment Consultant; Lorenzo Johnson, Lead For America Fellow; and Tony Geara, Transportation Engineer. The MCity test site itself is about 1/4 mile to the north-northeast of this location, near the blue water tower pictured. (Photo by author.)