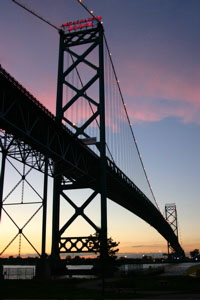 The Ambassador Bridge, or, Moroun’s Folly, as I call her, is 90 years young today. We commemorate this iconic landmark– and textbook example of the treachery of monopoly- on the tail end of two other great lakes tragedies including the lethal Big Blow of 1913 and the wreck of the Edmund Fitzgerald in 1975. A current project is underway to retrofit the slowly crumbling structure, just in time for completion of the Gordie Howe International Bridge (GHIB) in 2024. Windsor firm Matassa is underway on a massive retrofit project to reinforce joints and concrete across the 7,500 foot long suspension bridge.

The Canadian government has demanded the bridge be demolished once construction of the Gordie Howe bridge is complete. Moroun would tolerate such an eventuality if and only if they’d be allowed to build a second bridge, something they’ve been pushing for a long time. But regulatory scrutiny is intense, which is no surprise given the man’s affinity for marginally illegal hijinks. Strategic land acquisitions in the GHIB footprint are major speculation plays, and the Morouns have reaped millions through eminent domain sales from taxpayers. Monopoly, we learn time and again, never works out well for anyone but the owner.

As I’ve said before, the bridge is an important historical landmark; demolition would be a tragedy for both Detroit and Windsor. I’m still holding out for turning it into a park. But in the mean time, looks like we’re stuck with it for another few years. Long may her lights shine through the gloomiest of Michigan wint’ry nights!

You can read more from my June 2018 article about the temporary transit blackout across the border. (Also dig this awesome Forbes article on the subject.)