Mood: “It’s The Austerity, Stupid!” or, “Are We Ever Gonna Straight Up Call Out The Failings Of Neoliberal Economic Policy?”

Loneliness. Failures of civic engagement. A lacking sense of place. These are things that are often not discussed together. They’re certainly not typically at the forefront of conversations about free markets, though.

So, I was pleasantly surprised to encounter the program for a breakfast hosted by the American Enterprise Institute at magnificent new Shinola Hotel on Woodward in downtown Detroit yesterday morning. I braved the aftermath of near-record snowfalls, near-record cold (-14C), and near-record bus delay from the Vernor route. There is this lovely second floor atrium reminiscent somewhat of Dan Gilbert’s holiday huts on Cadillac Place. There was a sumptuous omelette bar and these delicious, tiny muffins!

First– I’m not generally a big fan of AEI. They enjoy funding from the likes of the Koch Brothers– and are actively engaged in Koch apologism. They push a hard line on climate change denialism. I have more critiques. (You’re shocked to read this, I know.)

But they’re not always entirely awful. They’ve had some critical coverage of Trump’s tax cuts, arguing that they haven’t strengthened the economy, nor increased the wellbeing of the average worker. But the overall vibe felt heavily, ah, Republican, shall I say, the audience including unsuccessful Republican candidate Lena Epstein, representatives of the conservative Detroit News, and some guy from Canton who once trolled me on Twitter and called me a socialist for believing we should have better regional transit.

The audience was also not exactly a representative sample of the city I have come to know and love. Almost entirely white, in a district owned almost entirely by white suburbanites, in a city that is almost entirely black and overwhelmingly impoverished.

In other news, water is wet.

AEI’s Survey on Community and Society has some interesting moments. Director of Domestic Policy Studies Ryan Streeter did a good job presenting on growing feelings of alienation among a wide range of Americans. Referring back to, among others, Robert Putnam’s seminal pop sociology book Bowling Alone (1995-2000), Streeter talked about the importance of neighborhood institutions as well as public infrastructure like parks or libraries that can bring people together. (Parks and libraries are, of course, publicly funded. So, why didn’t we talk about austerity? Can’t you correlate the decline in spending on public infrastructure with the rise of this alienation? I’ll return to this in a moment.)

One interesting point was made about those who identified as feeling a sense of loneliness versus those who felt “not lonely.” Streeter noted a point of linguistic interest as “lonely” does not have an antonym.  People felt more affinity, he said, for fellow humans in their immediate vicinity or community than through broader networks of political or religious affinity. You mean I can’t derive a holistic sense of wellbeing from NUMTOT? Rats.

None of this should be shocking. It does, however, provide hard data on things we’ve all been worrying about, though. Streeter’s tone echoed Jonathan Rauch’s article in the Fall 2019 edition of AEI’s National Affairs about the rise of tribalism and polarization. He begins with a story about a Trump supporter who refused to tow a stranded motorist with a Sanders sticker on her car and, the story goes, told her to call the government to tow her car instead. Tribalism, Rauch suggests, might be rooted in the failure of the venerable, old, liberal institutions that make our society what it is. But he also suggests that these institutions are flexible enough to be fixed, and that’s perhaps why they’re so valuable in the first place.

To be clear, Rauch is a smart guy. He studies this stuff and has written books on it. But he’s missing an important element.

Rauch and Streeter are both skirting the issue of what is actually failing in the system. We might have different approaches to answering that question. If I had to guess based on his presentation, Streeter might say that he’s more solution-oriented than critically-oriented. But missing elephants in rooms is just that. 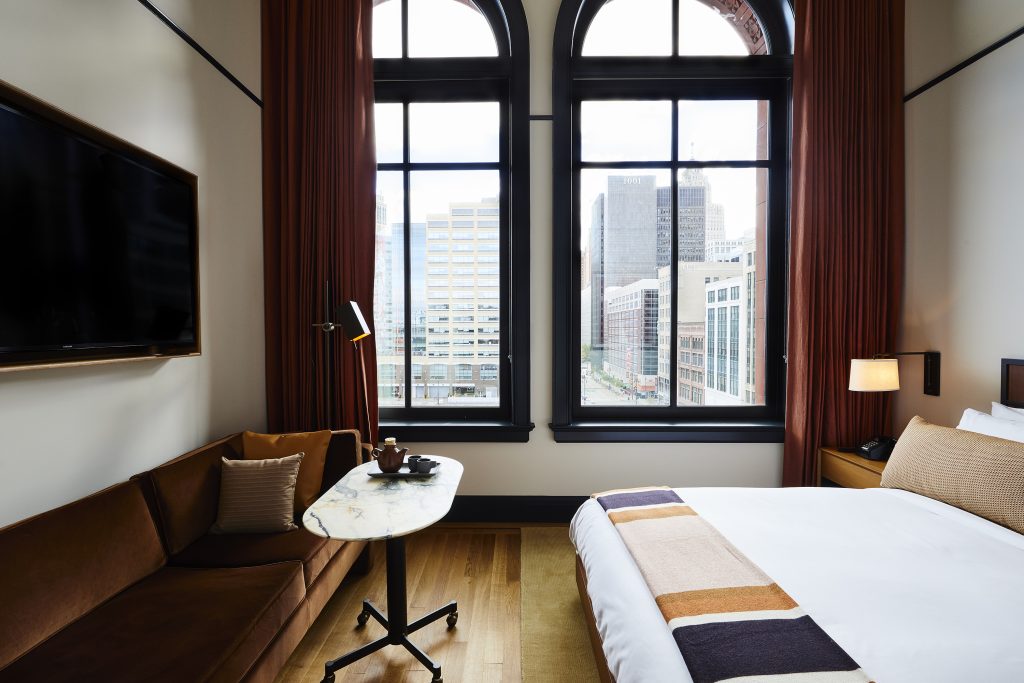 From the stately rooms in the Shinola Hotel, you can look out onto the pit in the ground that is the Hudson’s Site. The site will host, when completed, a large, mixed-use tower, built with hundreds of millions of dollars in taxpayer money. The former Hudson’s Department Store was architecturally intact when it was demolished, also at taxpayer expense, in 1998, and turned into– you guessed it- a parking garage. Photo by Nicole Franzen.

To be sure, it smacks of disingenuity when a vociferously anti-government institution like AEI– whose routine climate change denialism more closely resembles propaganda than credible policy position- advocates for the importance of civic institutions at a neighborhood level. While AEI claims to be independent, there’s a gross degree of overlap between some of its fellows, even the attendees at this breakfast, and the kinds of people pushing the very demise of these civic institutions. Nationally, the past few years have seen a Republican party that is increasingly interested in power and increasingly disinterested in the preservation of democracy, transparency, and civic institutions. AEI will push a hard line on the topic of small government while keeping close company with a lot of people whose very party works extremely hard to decrease access to democracy.

While I deal with many examples of this locally– notably a friend’s Facebook thread, where one of his colleagues recently said he was proud to fend off Mike Duggan’s “socialist power grab” of the RTA transit expansion proposal- I can write off these incidents as frustrations of living in the political backwater that is Michigan. But at a national level, the casual disregard for public institutions is nowhere more apparent than in the Trump Administration, which has done its best to understaff its own government (while failing to decrease the size of it at all), claiming to be “draining the swamp” while filling government with lobbyists and corporate insiders avowed to destroy the institutions they now lead.

And, so, the only thing that really trickles down is– no, not the wealth aggrandized by the wealthiest couple percentage of Americans- the discourse and lack of civility. The Michigan GOP (whose former finance chair was incidentally) sitting at my table) has done a lousy job of advancing civility or civic institutions, if its Twitter account is any indication, rife with attacks on the “far left witch hunt” of the “do-nothing Democrats,” among others.

AEI is clever to avoid mention of any of this. Nor was much said about the importance of creating good jobs. Or access to good jobs. (I return to the point on public transit– ironic because public transit is something “small government” types often rail against, pun intended, quite maliciously. The Kochs were very good at this.)

Even though a conspicuous graph in the report (page 7) shows a rock solid correlation between people who rated their community as “Excellent or Good” and people whose households make $75,000 or above (92% of this population) in contrast to people who were satisfied or more than satisfied and made less than $30,000 (only 64%).

If not disingenuous, it sure is a bit, uh, ironical.

And nowhere would it have been more ironic– poetic, even- than in the state’s epicenter of all corporate welfare and Reaganomic thinking, the heart of the Taxpayer’s Republic of Gilbertistan, in the Shinola Hotel– a brand owned by an out-of-town billionaire (about whom I’ve written before), nestled in a landscape built, demolished, and rebuilt with massive taxpayer subsidy.

You can draw an expansive Venn Diagram indicating a ton of overlap between “people who say they believe in free markets” and “Republicans who cling to failed models of Reaganomics, using it to justify corporate welfare and other disproven models of neoliberal economic policy.“

This is the problem with austerity and with neoliberal economic policy that pushes all of the emphasis onto the notion that the government should do everything it can to eliminate all regulations and make the rich richer in the name of trickle-down economics— and pay for it by slashing funding for public programs that disproportionately benefit lower-income citizens. It’s insidious.

It’s insidious because once wealth is agglomerated and held in larger and larger amounts, it stops creating value, and instead, experts want to talk about these nebulous straw men. While disintermediation– taking out the middle man- is a key goal of disruptive innovation, in this case, the experts are re-intermediating, creating this vague problem of “social capital” that stands between the cause and the effect. (Returning to Streeter’s point about “lonely” lacking an antonym, ‘disintermediate’ could use its own antonym. I’m sure we could invent a word in German– Ermitteln, or something.)

Policymakers author tax breaks and subsidies for billionaires– and then that money is lost forever. When budget talks come up again, we don’t have enough money to build that park or that library that, Streeter would concede, is important for building social capital within a community. We don’t have enough money to pay those teachers– the teachers that make for a strong educational backbone within a community.

We didn’t really talk about any of that.

But maybe we will.