NO AMERICAN LAWYER WOULD EVER SIGN OFF ON THIS, I thought, as I grasped an iron railing, looking up into the November rain as I climbed up grated steps 70 meters above the sodden ground.

I was climbing the retired Hochofen (high oven, or blast furnace), at the Duisburg Landschaftspark-Nord, a 180-hectare (445 acre) park built on the remains of one of the massive industrial complexes that still pepper the rolling hills of the Ruhr area of western Germany. At each stop along the stairs, displays teach visitors about the structure of the furnace, how air and ore are supplied to the furnace, and how the furnace is periodically tapped to produce molten steel.

It had taken me some time to get to the Landschaftspark, which is about four and a half miles (7.5km) north of downtown Duisburg. Because of its high population density, the Ruhr is, for the most part, very easy and affordable to get around by a combination of trains (U-Bahn, S-Bahn, Regionalverkehrr, and buses), so long as you don’t dare ask a representative of the VRR (Verkehrsverbund Rhein-Ruhr, essentially the Rhein-Ruhr Transit Authority) to explain their arcane zone fee system.

The park in Duisburg is about a 15 minute walk from the nearest U-Bahn station to Meiderich, sort of uptown Duisburg. Google Maps led me astray, as it is wont to do, of course, so I ended up venturing into a weird industrial area that had all of these warning signs and I actually got a ride from a local who was driving through. The signs were kind of confusing.

My magnanimous driver was interested in hearing about Detroit, as all people are these days, and told me that he used to work in a shop that remanufactured diesel engines, so we talked about the auto industry.

Upon arrival at the Landschaftspark, I was pleasantly surprised that the park was free.

“Anything I must see?” I asked.

“If you’re up for some walking, go climb the Hochofen,” the guide suggested.

So I did– followed by a tour past the former Gasometer, a tank where refined blast furnace gas was stored for later burning for power generation that has since been converted into– get this- a diving tank, and the former coal pits, deep, masonry-walled vaults, some of which have been converted into various uses. One was sort of a shallow, zen sort of reflecting pool with stepping stones in it, while another had a climbing wall. 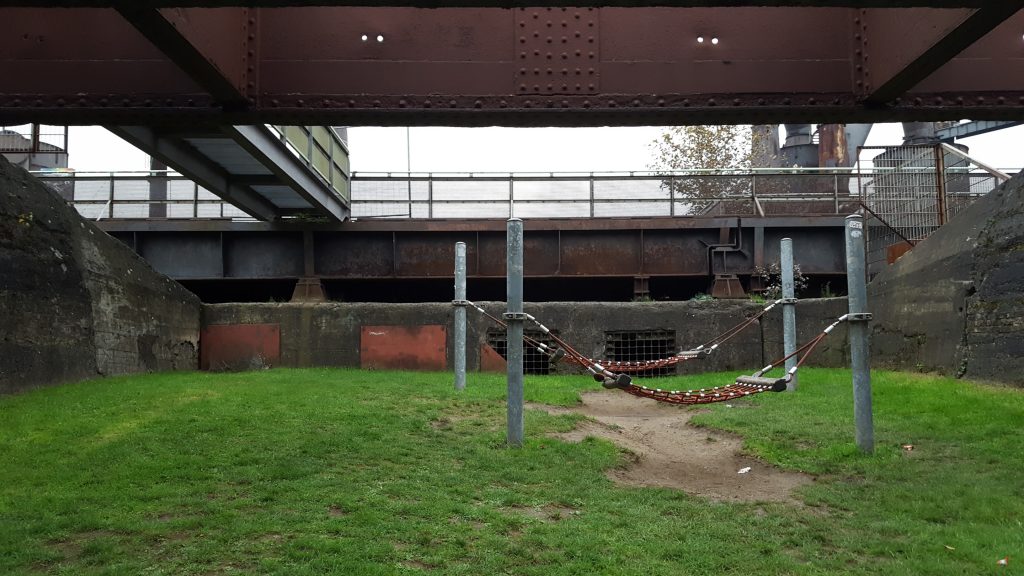 Fancy a nap in a hammock under the long-dormant smokestacks?

The Landschaftspark is simultaneously an ingenious reimagining of urban (or periurban) space– and a work in progress. The Zeche Zollverein, which is a ginormous corollary to the Duisburg site, offers similar examples, as I saw last year with the POCACITO program during the mind-blowing Extraschicht event. I started thinking about what this meant in the context of urban redevelopment as we look at a changing landscape of energy.

THE RUHR IN CONTEXT

The Ruhr is one of the most industrialized areas in the world, a densely populated landscape of mid-sized cities including the likes of Dortmund, Duisburg, Essen, Bochum, Oberhausen, Mülheim, Gelsenkirchen, and many smaller municipalities. It is an excellent case study in complementary industries clustering in one another’s proximity and the urban fabric to which that clustering gives birth. It is one of a few European areas that shares qualities with many Great Lakes cities and American industrial areas in that it was largely developed in the 19th century as a product of the expansion of the coal mining and steel industries. While the glory of the region’s industrial prowess has faded slightly, the redevelopment projects surrounding the coal mines including the crown jewel, Zeche Zollverein (possibly the crown jewel of any industrial redevelopment in the world), are impressive testaments to the infinite mutability of urban and even industrial space.

I picked up a couple of books at the gift shop of the Bochum Deutsches Bergbau Museum (German Mining Museum) including a nerdily-exhaustive history book about the mines, which features, among other things, some crazy photos of things like Art Nouveau staircases in mine administrative offices, as well as a book of historical posters from the heyday of industrialization in the 1920’s and 1930’s through the latter part of the 20th century, when mines had started to close. Another book was essentially a gallery catalogue of German artist Fritz Kreidt (b. 1936), who has captured some incredible scenes of industrial ruin.

The poster book:  “Wer zählt die Zeche?” a clever pun that says, “Who’s picking up the tab?” while referring to Zeche, also the word for “Mine,” so, “who’s paying the mines,” essentially (Germans aren’t quite as enamored of puns as Americans are, so I found this quite clever). 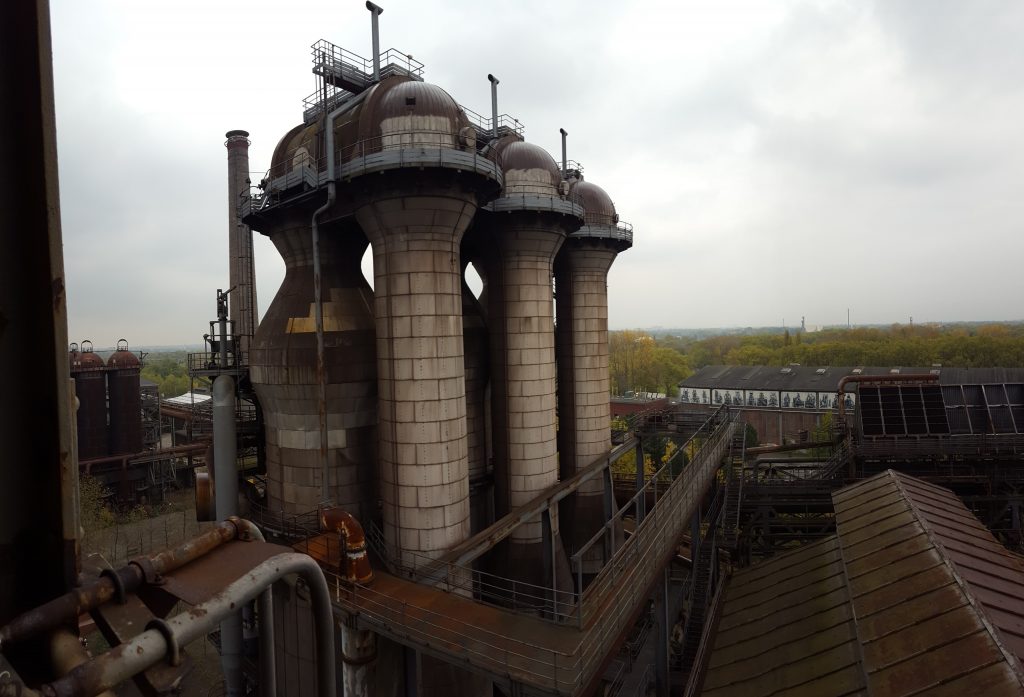 The Detroit Free Press’s John Gallagher recently reported on a crew from the German Marshall Fund, which visited DTE Energy’s defunct Conner’s Creek power plant on the city’s east side. While I have expressed skepticism about the plant’s future in being turned into anything other than, well, a vacant lot (maybe surface parking? Who knows?), it’s an important conversation for our city to have as it works on the albeit snail’s pace of redeveloping sites like the Packard Plant as a matter of preserving our city’s industrial heritage while looking at what’s next for sustainable land use. DTE’s (formerly the Public Lighting Authority) Mistersky power station is another site worth considering, especially vital owing to its location in the shadow of the new US-Canada bridge.

Eventually, Detroiters will decide to ditch the Marathon Oil Refinery, which sits at the confluence of the region’s least salubrious industrial surface road and rail corridors, on the River Rouge, and between a number of embattled urban districts and municipalities. The key is that we shouldn’t be planning on dismantling these sites– we should be operating them based on what they can one day become and how, whether today or in the future, they can fit into a greener future for the cities in which they operate.