Greening Sprawl and The Limits of Incrementalism

Often, when I get excited about a discussion about sustainable urbanism or green building, the projects in question turn out to be, well, lackluster. I joke that New Urbanism is about designing sprawling strip malls where the parking lots are on the inside of the block rather than fronting the street.  Take this article that talks about clustered homes that share common walls to save costs and face a central courtyard. Revival of the Cottage Court! Not a new idea– it’s been done in the United States for centuries and elsewhere for millennia. 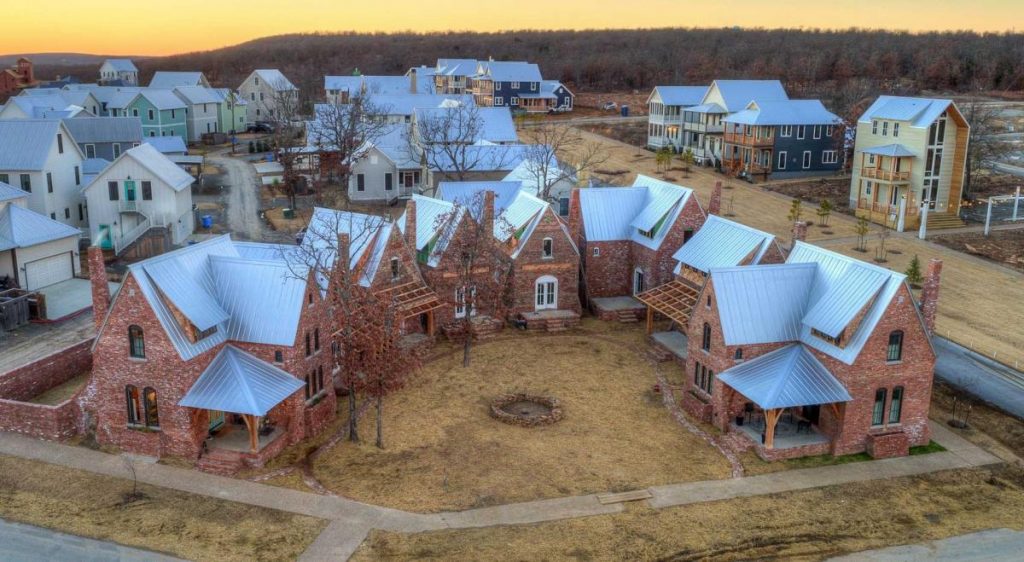 Sure, we’ve favored suburban sprawl– but the idea here is that we are turning a corner and starting to think that, well, maybe sprawl is actually kind of the worst.

First thought: Oh, cool– where is Carlton’s Landing? Some hip new urbanist neighborhood in a city I’ve never been to?

No. Bubble: burst. Turns out it is some greenfield project in the middle of nowhere:

Seriously, where the heck? If you had no idea from looking at the map, I didn’t, either, and had to zoom out several times before I found a city I was familiar with. An hour and a half from Fort Smith, Arkansas (greater metro population of about 275,000), an hour from Muskogee, or an hour forty-five from Tulsa. Effectively, nowhere.

But in this case, we’re talking about greenfield development.

To the developer’s credit, prices are not outrageous, and the houses are admittedly gorgeous. But this is the same thing I periodically spar with Matt Grocoff about on the Veridian Farm project in Ann Arbor, or with Kevin McNeely about when he told me about consulting on a LEED-certified sprawl project in west of nowhere, Michigan.

“If you’re going to do sprawl,” he basically said, “do it in a less destructive way.”

Well, I guess. But incrementalism is not much of a path toward structural change. Much like liberals who think they’re saving the planet because they drive their gas-guzzling Subaru to Whole Foods in a new strip mall to… buy paper straws. Make no mistake: These are professionals who know their stuff, and, at a fundamental level, they get it. But we are too beholden to the entrenched forces of markets. Urban land ownership is often complicated and tied up. And no one is going to finance a five-story, net zero energy building on Livernois Avenue on the west side of Detroit.

Why? Well, for one, bankers lack imagination, investors are risk-averse, and suburban municipalities are obsessed with growth because they’re only concerned with the short-term, and because revenue sources are so limited for things they need, like schools and infrastructure budgets. Fiscal impact analyses are predicated on unending growth to provide more services, and states fail to recognize or, indeed, regulate at all, the fact that much sprawl is just a matter of shifting populations farther from dense centers in a zero sum game at taxpayer expense. So, more sprawl, where land is cheap and people want to live somewhere far away from Those People.

Is it a less destructive model, wherein people still have to drive to get everywhere, but have Rick Fedrizzi-certified light bulbs? I simply don’t buy it. Detroit’s population could increase sixfold before it hit New York City density, and that would only require developing vacant lots.

Detroit has entire neighborhoods that are all but entirely vacant. On this issue we should stop compromising. It does a disservice to urbanism and planning everywhere. But challenging this paradigm is challenging fundamental assumptions about capitalism, as Naomi Klein did when she pointed out that it isn’t a question of “greening” everything, it’s a question of rethinking our culture of consumption.