One of the interesting things about Detroit’s built environment is the hub-and-spoke street layout. There are multiple, conflicting street grids, some working off true north and some following the curvature of the river. This is a product of a city laid out by French farmers, expanded during peak City Beautiful, and later platted in the era of the automobile (1920’s). The spokes disrupt this grid, though, converging elegantly in downtown. Prominent in the viewshed of most of the spokes is the towering Renaissance Center, a monstrous, ultramodern complex whose futuristic interior makes for excellent lunchtime strolls and is one of the great public spaces of the city. This makes for a nice reference point from anywhere in the metro area.

But when driving into Detroit, you’re not just thinking about the GMRENCEN, as she were rebranded. Rather, you’re thinking about a disparate cabal of architectural welcome mats. Woodward Avenue has the Little Caesars Arena, which is impressive, sordid, and mighty. And, of course, Woodward has all manner of other large buildings, Grand Circus Park, etc. Grand River has the Grand Army of the Republic building, which is surrounded by adjacent parking lots, but is also near the sweeping tent shapes of the Rosa Parks Transit Center. Farther northwest on Grand River, you get the landmark of the Motor City Casino, whose brilliant LED lights cast forth their honky tonk gleam into the darkest night. East Jefferson boasts gas stations and car dealers and the occasional, understated Art Deco masterpiece of an apartment building.

“Woah, nice relationship to the streetscape, bro!” Similar to the DDOT offices on East Warren, the hulking, tundric ecru, USPS main facility in Detroit is a glorious American homage to Soviet “Khrushchyovka,” that is, those panelized apartment buildings built in the Soviet Union by Comrade Khruschchev. There’s even a Marathon gas station, so you can Buy Local Gasoline, making the air dirty from your car while the refinery makes our air dirty all the time. (Google Street View.)

Fort Street, on the other hand, has warehouses and parking lots. At Rosa Parks Blvd. (formerly 12th St., for reference to the numbered streets), you have a massive 1913 warehouse that Bedrock relatively quietly purchased and renovated. (They were even thoughtful enough to build a giant parking structure in back.) Ok. We’re getting somewhere here! My idea is to make Fort Street a more welcoming corridor for traffic coming into the city from the west/southwest, coming off the Lodge, or looking at the skyline from the riverfront. East past Rosa Parks, you’ve got the Salvation Army facility, the post office, and a gas station.

I’m looking at the space between Eighth Street on the west and the strange little overpass that connects Fort Street to the Riverfront Towers on the east. This space is mostly owned by the US Postal Service. There is a small section of street that was vacated at some point so that the USPS could adjoin a couple of parking lots. Wayne County Community College owns the eastern portion of the block.

This is over six acres. That’s six acres– dedicated to vehicles that are only used for about 1% of their life. The breakdown of the more than 500 spaces is shown below (per lot). 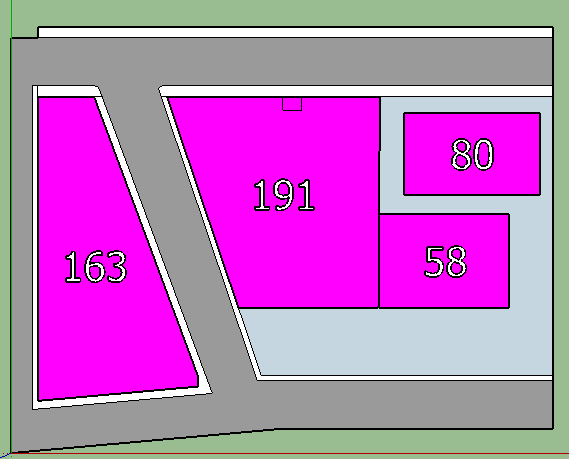 There are 500 parking spaces here over six acres (including Cabacier St.).

Let’s say we wanted to build on those lots. How do you work with the US Postal Service to get a project like this approved? 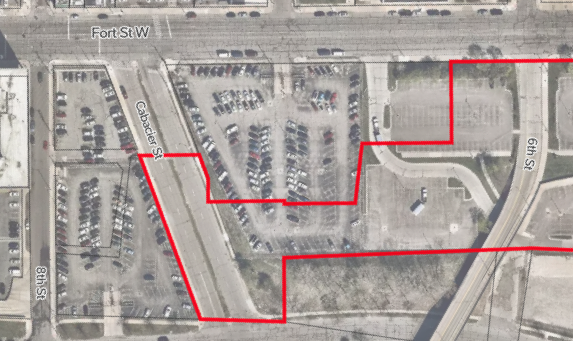 The red outline shows the lot and right-of-way that is apparently owned by WCCCD. It seems to bisect the USPS lots and covers part of Cabacier Street in its entirety. Now, what in the darn diddly?

But if you could!

Indulge me for a moment. We know that Hollywood portrayals of most things are fairly inaccurate. Happily-ever-after endings, for example, which are rare in the crushing loneliness of declining, late capitalist empires. Or silencers on handguns, which, you know, don’t actually make handguns silent.

But one thing that is often quite well portrayed in films is the jurisdictional head-butting that occurs between federal and local officials, typically law enforcement.

I once opened up an old inspection file in the city of Detroit building department for a post office building. I was frustrated that the employees were parking illegally on sidewalks and blocking crosswalks. I was going to see if I could find a reason to justify an inspection to be able to communicate this to the staff. I asked the facility manager, a polo-shirted, middle-aged guy with well-groomed facial hair and a bluetooth headset stuck in his ear, if he wouldn’t mind if I had a look around.

“I would mind,” he said, bristling, “because you don’t have any jurisdiction here. We allowed you in one time several years ago as a courtesy. And we are under no obligation to do so again.”

Sheesh, Mark! I mean, you coulda just said no thanks!

“I’ll… uh… see myself out,” I said, using that exit for the first time in my life.

I was a little bit irked, but then I realized that this guy had risen to the peak of his life, wearing a bluetooth headset and a red polo shirt and managing a postal facility. He isn’t making $13.80 a week in donations from his loyal reader base. He isn’t mired in crippling debt from an advanced postgraduate degree of dubious value! He’s never penned an editorial in the Oakland County Daily Tribune about the importance of transit expansion!

“Oh, we don’t mess with them, they’re federal,” a parking supervisor later told me. Similar to how the President continues to argue that he has absolute immunity, local law enforcement seem to think that federal employees are absolutely immune from violating local laws. But, for the most part, though, I could quote Tevye from Fiddler on the Roof, referring to the Ruskis: “We don’t bother them. And so far, they don’t bother us.”

This tongue-in-cheek tangent is meant to illustrate an important challenge in urban development, and that’s the difficulty of reconciling disparate bureaucracies, a debate we have frequently in transitland. MDOT’s own staff, for example, are basically exclusively highway engineers. They more or less only care about cars. This understandably makes it really hard to have conversations about transit expansion. If you’re the Post Office, you’re concerned with your staggering pension deficit. You’re not going to want to get involved in real estate development. (Unless, of course, there’s a huge public push for it).

What’s our pitch for the site? 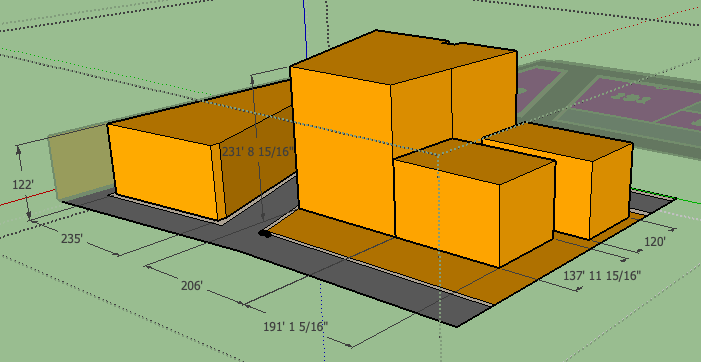 It’d be really tough to get a federal facility that enjoys massive, free parking, to get rid of that amenity. While there is ample evidence that incentive-based programs work to shift mode share (how many people drive), it would be a nearly impossible sell to remove 500 parking spaces and create several hundred apartments with zero parking. Instead, let’s talk about putting it underground. How much? Well, if we want to keep the existing parking capacity, putting 500 parking spaces underground would indeed be some bucks. But we’re also adding several hundred apartment units on this site. So, I concede: perhaps we need more than zero parking spaces.

Narrowing the preposterously wide sections of boundary streets here gives us some more space to build the parking into the hillside.

As the law is written, this development project would require seventeen acres of parking lots (2,283 spaces). That’s 13 football fields, equivalent to eating up this entire section of riverfront park space, or the surface area of all of the empty seats at the average Red Wings game. 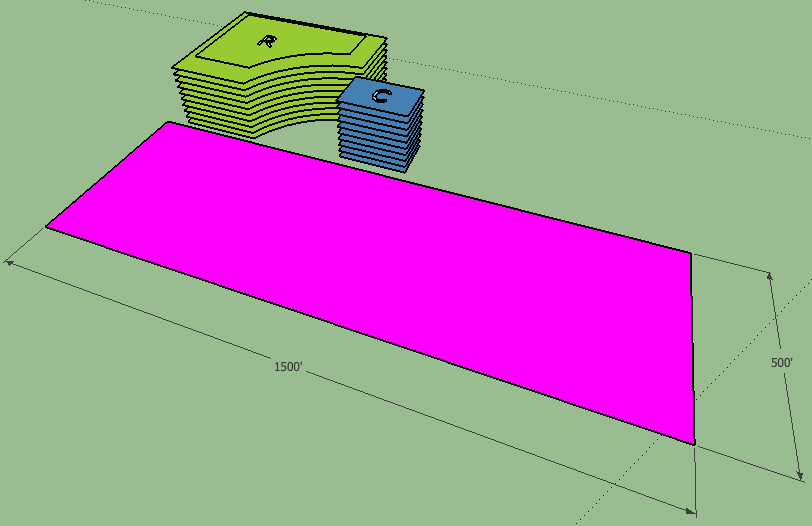 But if you put it underground, this works out to a cost of about $59.36 million. Remember from our introductory post that when you put a parking structure underground, it immediately becomes far less spatially efficient because of the added space required for things like ventilation. You might be only utilizing as little as less than a third of the area in a parking structure as actual parking spaces. $59 million is a ton of money.

Cost-wise, it’s equivalent to building an additional 400 apartments. It’s also enough money to pay for annual DDOT passes for 90,000 people. Or to buy dozens of new buses and operate them on a route like Fort Street or Rosa Parks Blvd. But it’s not as though this parking has to be free for residents or visitors. Many parking garages have free validation from businesses– grocery stores are a good example. And it’s entirely possible to offer tenants or homebuyers a discount on their purchase or rent in exchange for forgoing parking access. In this case, this amount could work out to $10-20,000 per space!

Space-wise, we could certainly fit all of this parking underground within the project area with a three-story underground structure. But ideally we would be reducing the parking minimum requirement while still allowing access. Again, going back to cost, this can easily be done with dynamic or appropriate pricing.

Let’s also look at the wins for various stakeholders.

WCCCD wins because they’d be able to profitably sell off a bunch of otherwise pretty much dead land. But they wouldn’t lose parking capacity. This might come in handy given their recent expansion, which is wrapping up after nearly two years of construction.

USPS wins because they’d maintain access to employee parking while also being able to profitably sell off land. A USPS spokesperson said via e-mail that the postal service maintains one commuter incentive program for its corporate offices in Washington, DC. That’s right. No post office anywhere in these United States has programs to encourage transit ridership or alternative commuting methods for its employees.

DDOT wins because this project could, if properly executed, create enough of a revenue stream to fund new bus service along Fort Street.

The Riverfront wins, because it now has access to secure, underground parking for events. New residents also become stakeholders who can support smarter development and conservation efforts associated with the glacial creep of riverfront park expansion.

Detroit wins because this project creates a ton of tax revenue and creates a brilliant new entrance into the city plus a nice addition to the skyline. A $330.5 million development project would create hundreds of high-paying construction jobs for years. It would also create permanent employment to occupy the expansive commercial space. Property taxes would create millions more for schools. 2,000 new residents would also pay millions in payroll taxes, state taxes, and would, of course, spend lots of money, hopefully locally– sales taxes plus economic product would be transformative.

Can we imagine a better riverfront? A better front door for Detroit along this important, historic corridor? 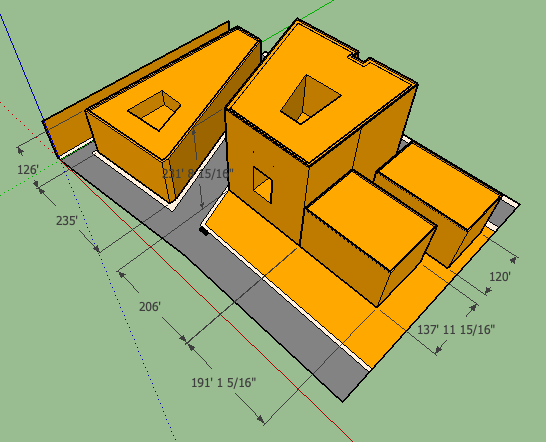 Another view of more developed massing of these buildings. In this case, the proposed space for development occupies only the spaces currently occupied by surface parking. The small vacant strip at the south end of the site is currently a sort of berm with trees that separates Jefferson Avenue from the parkingscape, but there’s no reason why this couldn’t also be developed– or why the subterranean garage couldn’t also extend under Jefferson Avenue here. Jefferson is 60′ wide, which is unnecessary for the amount of traffic it handles. There is also no compelling case for Jefferson to be a four-to-six lane street that serves solely as a feeder to the end of M-10 while the far more heavily-trafficked and better-developed Fort Street exists a block to the north. (Jefferson turns into an onramp, which turns into Jefferson– we don’t get it, either).