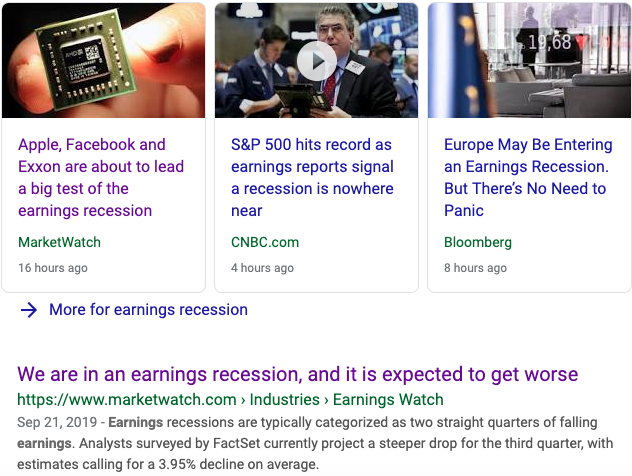 A few big companies took a beating last week as they reported earnings misses, among them Budweiser and Amazon. Most earnings are, across the board, decreasing a little bit. (I’ve previously lamented that no one seems concerned about how disastrous this could be for companies trying to refinance massive debt loads.)

But no worries, because then there’s this:

So, we’re in an earnings recession, but no problem, because the market is at an all-time high? What does that mean?

For the lay investor, it means that there’s a high probability of turbulence ahead. Market fundamentals have deteriorated, rather than improved, over the past couple of years, while the market valuation has gone through the roof. Volatility? What volatility?! The Trump tax cuts propelled valuations beyond previous all-time highs through stock buybacks.

There’s also a question of whether the Fed will cut rates this week. By most estimates, investors have already priced in the appreciation premium of a rate cut. So, a rate wouldn’t do much to increase valuations. And yet most investors expect it. Why would the Fed cut rates when markets are this high? Powell called the last cut a “midcycle adjustment,” but the board really probably should have increased rates as a way to reign in the soaring market. Markets are cyclical, but regulators should work to ensure their stability. The Fed has been quietly spending hundreds of billions of dollars to do just that in the repo markets for the first time since 2008. Anything to reign in the growing debt pile that, while unlikely to break the economy on its own, will certainly hinder it in the coming decade.

It is all grossly illogical, kind of scary, and utterly dangerous. Because if the federal reserve has no downward runway to lower rates, it means it can’t easily stimulate growth in a recession. Trump has meanwhile demanded that rates be lowered to zero in the name of growth (though the Fed is supposed to be independent of the Executive). There are a lot of problems with this, but let’s stick to the market for a minute.

Ubiquitous bullish feelings means investors think the market will keep going up. I don’t mean the ever-shrinking number of individual investors, who do little to influence prices. Rather, the powers forcing the market up are doing high-frequency, high-volume trades. Often, these are being executed automatically and through passive investment vehicles, which some investors think poses its own huge problem.

Short-term, bearish options trades on indices– bets against the market- are minimal, suggesting that very few people are betting that this market still has some runway in the coming weeks. For any finance nerds among ye, consider that a latte-priced $4 bet against the S&P 500 (NYSEARCA:$SPY) could yield you $1,780 if the market takes a 10% dive by this Friday. That’s a 445-to -1 return. And yet an options contract having that low a premium means no one is betting it’s going to happen. (Unless, of course, they know something about what Trump is going to tweet next. Remember that mysterious trade that netted a few traders a cool few billion? Who’s buying e-minis on this one?)

So, whether based on greed or naïvete, we continue to believe that trees will grow to the moon. Even when the view from atop said trees should be enough to induce acrophobia in the most experienced climbers.

Hold on– it’s going to be a wild ride.