The ADU as Community Development Tool?

While managing the Detroit Land Bank housing development programs at Southwest, I’ve come across a number of scenarios in which a single-family home might almost– but doesn’t quite- fit the bill of the desired housing arrangement for the purchaser. They want the quiet neighborhood, the location, the architecture, but they would really rather have a two-unit where mom can live upstairs, or where their daughter can live upstairs, or where the grandkids can stay when they come to visit. The two-unit is surprisingly common in Detroit, but the accessory dwelling unit, an age-old concept also sometimes known as the mother-in-law suite or granny flat, is a new idea for the Motor City.

The single-family home within the context of Detroit’s expansive, Leave It To Beaver neighborhoods, fits into a relatively narrow range of purchasing options. Homes are 1,600-1,800 square feet (149-167 m2) and sit on tenth-acre (0.04 ha, 405 m2) lots. You can’t buy condos in a four-story, mixed-use building in Grandmont-Rosedale. Availability of especially rental units in the farther-flung neighborhoods is severely limited. But one major asset of Detroit’s built environment is the scores of expansive, historic neighborhoods like Marygrove, pictured above– probably one of the nicer complete neighborhoods that is still fairly affordable, but this sort of block as pictured is not particularly rare.

On the financial, purchasing side, while there are plenty of federal, state, and local programs offering generous assistance to homebuyers, most notably the $15,000 HomeLIFT downpayment assistance program, well-branded by Wells Fargo as a way of “giving back,” if “giving back” means “you guys settled a $15 billion lawsuit with the federal government for selling bogus mortgages,” these are all geared toward owner-occupants of single-family homes.

Single-family housing in the Marygrove neighborhood. Highlighted is a home on Roselawn, developed as the fourth home in the Talmer Bank program, which would make a suitable candidate for ADU development. Garage in need of renovation.

So I got an idea: If we designed and built an accessory dwelling unit on the back of these properties, we could solve a few problems at once:

A 2008 HUD report has addressed these issues, which are admittedly more topical in markets with super tight supply and super high demand, but Detroit is moving closer to that point every day, and our programs in Northwest Detroit have had absolutely no problem finding buyers. (Closing the mortgage is another problem but hardly unusual in Detroit.)

Below is an idea for the ADU configuration, which could fit two cars and an apartment unit upstairs that could be a 350-450 square foot apartment constructed at a cost of under $50,000. The ADU Garage combo notably sits at the back of the lot just like the original garage did, leaving plenty of space between it and the house for a back yard. 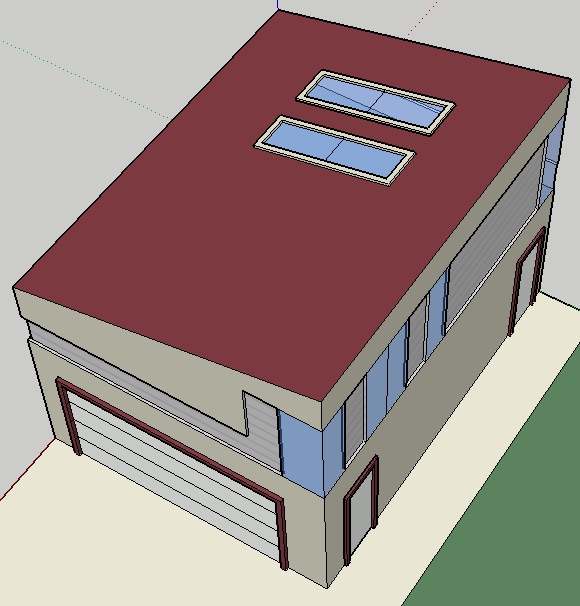 While city is fairly permissive about zoning for two-family structures, which are plentiful but often count as nonconforming uses, it’s unclear whether they would be interested in allowing this sort of designation. But thinking about the total capital outlays required for this development and the staggering soft costs and staff time required to design and manage these programs, the incremental cost of adding $50,000 to a construction project that is one of a multi-million dollar development program is, while more than a drop in the bucket, a modest sum. Appraisal, of course, is another challenge. But with the funding commitment, why not try it out?